Downtown Dallas, Inc. identifies and funds supplemental services and projects that provide visible improvements for the community.  In a recent project, they recognized that the corridor between City Hall and the community’s outdoor market was difficult to navigate due to wide, multi-lane streets, few dedicated crosswalks, and an oddly-configured intersection that presented challenges to both pedestrians and motorists.  Along with the City of Dallas DOT, DDI knew that if they could calm traffic and improve the route, area residents, city employees and market vendors would all benefit from safer, easier access between City Hall and the market.

Reconfiguration of the intersection at Marilla-Canton-Park would be cost prohibitive and take a long time to implement.  Instead, they elected to construct a center island in the intersection that would slow vehicular traffic, help motorists determine which lane to use for various turns, and make the street safer for pedestrians to cross.  Their challenge:  they wanted the protective qualities of permanent infrastructure, but the flexibility to test different island configurations to determine which shape would be most effective.  Concrete’s cost and permanence eliminated it as an option, so they decided to create the island using DEZIGNLINE’s CURBRAIL which was installed in a couple of hours. 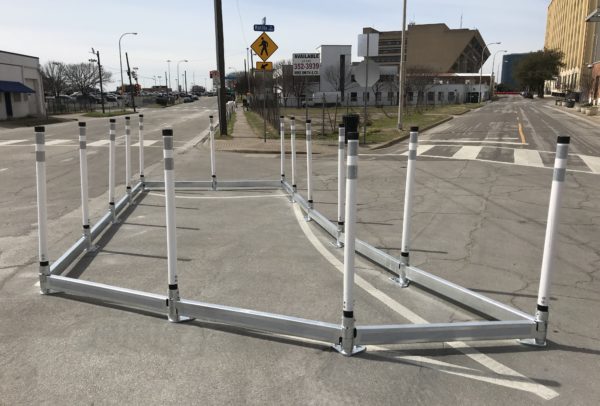 The island will be a permanent installation – until/unless the City wants to pull it up and reconfigure it to test different shapes/sizes.  As a bonus, the City appreciates that storm water can drain freely and the system won’t create streams or puddles. 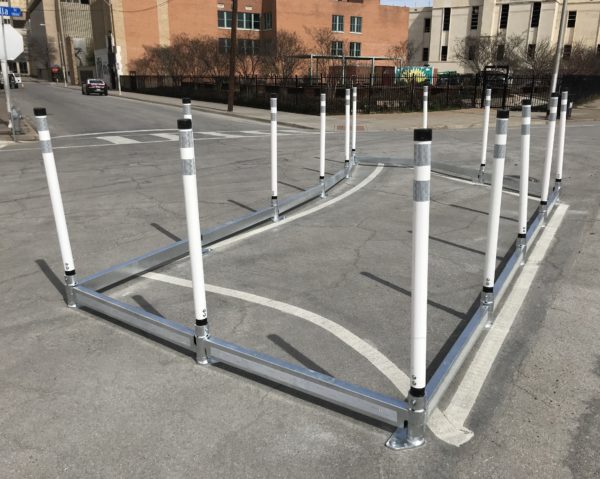 DEZIGNLINE thanks Downtown Dallas for planning this traffic-calming project, and the City of Dallas for installing it so quickly!